What Is A Termite?

Everyone has heard of a termite at one time or another. Maybe you’ve heard about a friend with an infestation. Perhaps, you’ve heard of a co-worker being hit with thousands of dollars of damage because of termites. Whatever the situation, there is no denying that most people know termites are destructive critters. However, that statement cannot be truly valued until you suffer from an infestation yourself. If you are here, that’s exactly what you are going through. Here’s what you need to know about the critter:

Each termite colony is developed of a variety of members. Each member belongs to what is known as a caste. Each caste has very specific jobs. While each member has different jobs, each job or task is imperative to the betterment and development of the colony. To better understand the termite colonies, you need to understand the members and what their jobs are. Here’s what you need to know about termite castes.

What Types Of Termites Are In Baltimore, MD

As you learned earlier, there are tons of different species of termites. However, there are only one primary species that you’ll likely deal with in Baltimore. This would be the Subterranean termite. This species can and its characteristics are dependent on the termite’s role in the colony. For instance, the worker Subterranean can grow to be 1/8 to 3/8 inches. The soldier Subterranean termites are similar in length but are more identifiable because of their powerful mandibles and large brown heads. The reproductive members of this species can grow to be ½ inch long and are responsible for contributing to the growth of the colony’s members. The workers do the tunneling, tending, and feeding while the soldiers fend off oncoming threats.

Most Subterranean termites like to live underground whenever possible, but there are times when they’ll live in mud tubes. These tubes are usually constructed on the outside of wooden structures to allow access to the structure. Just like other termite species, these members like to feed on products containing cellulose. With their hard, saw-toothed jaws, the Subterranean termites are without a doubt the most destructive species. While they are extremely small and bit off small pieces of wood at one time, they can cause severe property damage.

In Baltimore, flying ants are commonly mistaken for flying termites. However, they are nothing alike and learning to spot the differences could save your property. Here’s what you need to know to help you distinguish between the two:

Here are some more interesting things you need to know about termites. This information can and will contribute to helping you detect and remove termites from the property.

Termites don’t pose any immediate physical threat to humans or pets. They don’t bite, they don’t sting, and they don’t transmit diseases. However, that does not mean they can’t be potentially dangerous. They can damage a wooden structure to the point where it is ready to fall down and then when you walk in it collapses. Columns and beams usually contain cellulose and these critters will go after that material. They’ll chew on it until deterred, which means it could reach the point where they cause a total collapse.

How To Eliminate Termites

Termites are surprisingly fragile creatures that can easily be overpowered by other weaker insects, but they are still extremely difficult to remove a piece of property. It is also possible to entirely remove them from a piece of property, but this does not mean it’ll be easy at all. Part of this is because they live 300 feet away from the property. Locating and shutting down the pathways to the property can be difficult. It only takes missing one of these critters and the pathway into the property and they’ll live on to fight another day. If the whole colony is not destroyed, termites will return.

Can I Eliminate Termites Myself?

As you can see, termites are complex creatures with a complex colony system. Unfortunately, this makes DIY treatments all the more difficult. There is a whole slew of over-the-counter chemicals available for termite eradication, but these products aren’t as effective. This is because they don’t contain all the essential ingredients. Most of the ingredients needed to successfully kill termites are illegal to the general popular. This is just something you’ll want to keep in mind when choosing a pest management professional in Baltimore.

When Will You Get Here?

Our techs stay pretty busy all year round in Baltimore, but we are more than willing to make exceptions for our customers. This is likely one of the things that keep us so busy. Regardless, all you have to do is give us a call and we’ll be out on the property within the next 24 to 48 hours. We do, however, have emergency services available if and when they are needed. All you have to do is pick up the phone and give us a ring! Call today for service tomorrow! 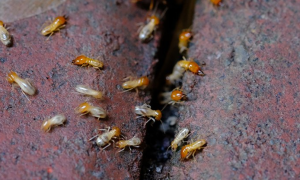