Maryland is known for its role in the creation of “The Star-Spangled Banner,” rolling mountains, and beautiful sandy beaches. One of the state’s most popular cities is Baltimore, which is home to approximately 593,490 people. While Baltimore is one of Maryland’s more popular cities, having 99 local and National Register Historic Districts increases the risk of rodent and insect infestation. The Baltimore Metropolis area has about 73,673 land-based businesses.

The cockroach is the city’s biggest insect threat. Scientists classify insects into categories, depending on their behaviors and physical characteristics. One specific classification comes to mind when speaking of insects in the City of Baltimore. This classification is overwintering pest, which is utilized in reference to insect species that spend the winter season in the overwintering state. Overwintering is similar to hibernation, as it involves a deep sleep.

The most common overwintering pest sightings in Maryland involve the following species:

The boxelder bug is a small insect, growing up to 0.5 inches in length. The body has distinguishable markings that are set on a black backdrop. The wings are black with a bright red outline. Small crevices, gaps, holes, cracks, and other openings can become entry points into the human habitat.

The box elder diet consists of sap from seeds and cones of various tree species. The insect is drawn to its namesake, the “boxelder tree,” and the cheery, maple, apple, and plum trees.

Box elder bugs colonize in preparation for the upcoming overwintering process. Successful home infiltration could be the difference between living and perishing before the winter season comes to an end. Overwintering continues until the following spring, generally in the latter part of the season. This is when the insect species begin to breed.

The ladybug is a beetle species that enter the overwintering state in the late fall or onset of the winter season. The insect has distinguishable features – red, orange, or dark yellow shell-like wings, covered with black polka dots.

Butterflies, mites, mealybugs, and ants make up the boxelder bug diet. Ladybugs do not cause structural damage to buildings, fences, gates, or trees. The most unappealing and notable feature of the ladybug is a pyridine-based secretion. The secretion is a safety mechanism to deter predatory insects and animals from trying to eat the ladybug. The secretion has a foul odor and agents that stain various materials – paint, fabric, upholstery, and wood finishes.

The cluster fly is one of the most dangerous overwintering pest species. The insect has been scientifically linked to multiple human diseases – tuberculosis, salmonella, Shigella, E. coli, cholera conjunctivitis, dysentery, typhoid fever, and infectious anemia. Fly-borne illnesses are spread through bites and contaminated food and water.

Cluster flies are parasites of the earthworm during the early phases of the species’ life cycle. Once the insect reaches the larvae life stage, it is no longer a parasite of the earthworm. The insect utilizes entry points through open windows and doors to infiltrate homes.

The leaf-footed pine seed bug is a unique overwintering pest, with three sets of legs, two antennas, and a long, slender body, all of which are a dull brown coloration. The diet consists of saps from the cones and seeds of the pine tree.

The overwintering leaf-footed pine seed bug clusters in the pine tree, shrubs, and tall grass throughout the winter season. When the insect successfully infiltrates a home, the threat of hypothermia and becoming food for predator animals and insects are no longer threats.

Like the ladybug, the leaf-footed pine seed bug generates a pyridine-based secretion to keep predators at bay. Again, the secretion has staining agents and a pungent odor that even humans find unappealing.

The Brown Marmorated Stink Bug “BMSB” is one of the largest overwintering pest species. The adult grows up to 0.5 inches, with a shell-like, shield-shaped body. Marmorated coloration covers the insect’s legs, antennas, abdomen, and back.

The stinkbug originates from Asia, entering the United States sometime in the late 1990s. Residents of the small Philadelphia town called Allentown began to notice stinkbug sightings in 1996. Stinkbugs traveled in shipping crates from Asia to the United States. Today, the insect can be found in Tennessee, Kentucky, West Virginia, Philadelphia, Maryland, and Virginia.

The diet consists of various plant species and fruit orchard trees. While the stinkbug is a harmless insect, its pyridine secretion is described as “foul” by most witnesses. The insect leaves a mess everywhere it goes. The pyridine secretion stains furniture, drapery, upholstery, paint, and other surfaces.

What Is My Baltimore Property Under An Overwintering Pest Attack?

Cracks and openings in heating & air conditioning ducts, dryer vents, window & door frames, and utility passageways very often become overwintering pest access points. If the structural components are not in excellent condition, overwintering pests will infiltrate in the home. The insects have several weeks or months to attempt infiltration of commercial and residential establishments.

Spending the winter season outdoors is unappealing to overwintering pests. The dangers these insects face are obvious, as there is a continuous risk of becoming food for predatory animals and insects. There is also the risk of freezing to death, while in the overwintering state.

Overwintering pests begin to wake up from a deep sleep, beginning in mid-spring. The insects may come out of overwintering earlier, depending on the weather.

What Is The Most Effective Overwintering Pest Prevention Strategy?

Keeping your property safe during the overwintering pest peak season requires the following:

In the late fall and spring, some homeowners like to air out their homes by opening doors and windows. While this is a great ventilation method, it leaves the home vulnerable to overwintering pests. The insects sit back and wait for opportunities to invade homes through open doors and windows.

Any exterior opening that leads to the interior of your home is at risk of becoming an access point for overwintering pests. Most of the species that belong to the classification cluster together to increase their abilities to find available access points. Damaged siding, vents, air conditioning duct connections, and window and door frames are generally utilized to infiltrate houses, duplexes, and townhomes.

It is crucial to repair the damage with industrial-strength sealants and other substances.

Cracks and crevices along the frame that supports the doors and windows of your home are often utilized as overwintering pest entry points. A layer of silicone or caulk can be utilized to seal the openings.

Holes and unsealed screen enclosures are also overwintering pest access points. When the seal dries out and breaks off, it will leave the screen vulnerable. The same thing can also be said about cuts and slits in screens.

It is difficult to repair screen enclosures. In most cases, the entire screen must be replaced and resealed.

Joints between bricks can also be utilized by overwintering pests to infiltrate buildings. However, these entry points are rarer and mostly pertain to vacant, dilapidated buildings. When the mortar joint breaks off, it leaves a hole between the bricks. The damage continues to worsen until all of the mortar is missing, resulting in vulnerabilities in the structure.

It is crucial to continuously inspect the brick around your home for signs of wear. Repair all damaged mortar utilizing a waterproof silicone. Repeat the treatment as often as necessary until there is a perfect seal between the bricks.

The cluster fly enters homes through the damaged fascia that covers the rafters. When the fascia is exposed to the elements, without routine repairs, it will eventually be utilized by overwintering pests to infiltrate the human habitat.

If the fascia needs to be replaced, it should be completed accordingly. If sealing will repair the damage, it is recommended to utilize foam insulation and a waterproof sealant.

Damaged soffit is also vulnerable to overwintering pest infiltration. The insects will enter through the damaged soffit. Sealing the openings with an industrial-strength caulk. 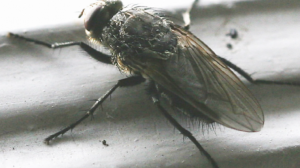